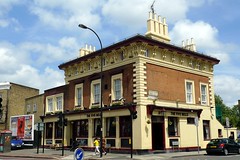 A large Irish pub at the Old Kent Road end of New Cross.

Note: The Five Bells came under new management in early 2016, and Brockley Central reports that it has changed substantially. We haven't visited since the change, so some or all of the details below may be out of date.

On a Friday evening visit in April 2008, this pub seemed perfectly friendly, preferable to some of the other local boozers. Bar staff were all friendly, especially the old chap I assume was the proprietor. People at the bar were friendly and chatty, so no complaints there.

The place is quite large, with plenty of tables around, and some couches. There's a prominent staircase but there doesn't appear to be upstairs seating (maybe a function room?). There is a "smoking room", which seems to be a boarded-in area just out the back of the pub. There's also a stage area, and sport is advertised as being shown (though on our visit just a couple of small TVs playing the horse racing with the sound off).

The Irish aspect is fairly subdued: a couple of small plaques here and there and the likelihood of hearing Irish music occasionally, but nothing more noticeable or partisan. They are more prominently fans of Millwall FC, but not in a threatening way like in the pubs around South Bermondsey and the stadium.

They have a good jukebox, which is 50p for two plays, and has a good selection. The most popular music, as listed on the jukebox, is overwhelmingly Irish though.

The only real ale on pump was Courage Best Bitter, but this was fine and £2.50/pint. Range of standard lagers and Blackthorn cider as well. They also look to have some good spirits behind the bar (some nice brandies, tequila, etc.).