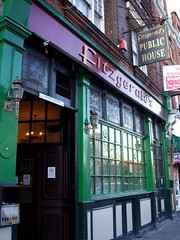 Fitzgerald's was a small Irish pub in Lower Clapton. According to Pubs Galore, as of February 2012 it is closed and boarded up.

The front part is your standard drinking area, while further back are two sofas, a pool table, and a dart board.

Kake et al. visited in September 2010 as part of the 38 bus route pub crawl. There was no real ale, so we had Guinness instead. Service was friendly enough. We sat in the back part, which smelled strongly of bleach (though as noted at the time, this is probably better than the alternative).

Accessibility: Small step up to get in.