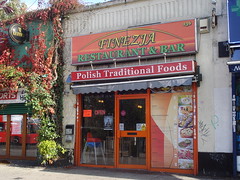 It's fairly small, seating only about 35 at plain but sturdy pale-wood tables. The floor is varnished boards, and the walls are done in an attractive mid-brown sponged effect. Trompe l'oeil arched windows on one wall actually hold mirrors, and more mirrors towards the back are cleverly used to give the illusion of extra space. Wrought iron decorations are mounted on the walls, along with an old-fashioned Roman numeral clock.

Kake visited on a Friday lunchtime in October 2014. There were two other customers in when I arrived around 11:30am. No music was playing, but the flatscreen was showing the news in Polish with the sound on.

I went for the placek po wegiersku (potato pancake with goulash; £7.80 for a main course portion) photo. The English translation of this on the menu was "potato pancakes with pork goulash and cheese" — this was a little misleading, as no cheese actually appeared on the plate, and the meat also tasted more like beef than pork. The pancake was nicely crispy around the edges, and softer where the goulash had soaked in. The goulash itself was gloopy and somewhat bland; the meat was a little fatty, but nicely tender. The accompanying carrot salad and sauerkraut offered a welcome tangy contrast.

A generously-sized cup of tea was £1.80. Service was fine. I ordered my food at the bar in the corner of the room, it was brought to my table, and I went up to pay at the bar when I'd finished. No service charge was added, but there was a small tip tray on the bar.

Child-friendliness: They have at least two highchairs. No obvious baby-change facilities. They have a short and rather uninteresting children's menu photo.

Accessibility: No steps in, just a bit of a ridge at the threshold. There's a wide aisle between the tables. No steps to the toilets.