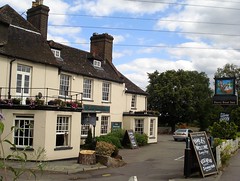 Nice little pub on the river up in Tottenham Hale. It changed hands from Mitchells & Butlers to the Stonegate Pub Company in October 2010.

It's fairly traditional inside, with seating spread over a number of areas. They also have plenty of outside seating round the back in a rather nice beer garden full of trees and broken up with fences.

On Kake's August 2013 visit, the real ales were Cottage Brewing Goldrush and Greene King IPA; they also had Cobra, Kozel, and other lagers, plus Magners cider. A pint of lime and soda was £1.20.

As of August 2013, food is served noon-10pm Mon-Sat and noon-9:30pm Sun from a standard Stonegate menu. They have a children's menu photo 1, photo 2, including a "toddler option" for the under-3s and with a printed activity sheet on the back.

Accessibility: Step-free to get in, and step-free to the bar, interior seating, and toilets (including an accessible toilet with a pull-down baby change table).