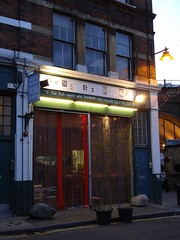 Feng Sushi started out focusing on delivery (and takeaway), but this branch at least has a few tables where you can eat in. They still offer delivery, and you can order online via their website. Their menu does include alcohol as well as tea and soft drinks; I assume this isn't just for takeaway but can be consumed on the premises too.

Kake tried the delivery option a couple of times in early 2011, ordering via the Feng Sushi website. There was no confirmatory email, which seemed odd, but there an automated phone call — "Your Feng sushi is on its way" — half an hour later. On midweek evenings, the food arrived within an hour of ordering, while on a Friday evening it was more like an hour and a half. It was all packaged in cardboard rather than the more usual plastic.

Seasonal vegetable sticks with barley miso (£4) seemed a little overpriced for what they were — a few sticks of cucumber, carrot and something else (kohlrabi?) that had clearly been cut some time previously and were looking a little tired. The barley miso dip went very well with them, though.

Vegetarian tempura (£7.25), seafood spring roll (£7), and chilli edamame (£4) all arrived cold; possibly excusable in the case of the edamame, but not in the case of the other two items, which were unpleasantly greasy at this temperature. While the edamame were generously portioned, the spring roll seemed rather overpriced, being simply one large roll cut in half, so two pieces rather than the "two rolls" advertised on the website; it was also rather lacking in flavour.

Nippon duck (£6) was interesting; like crispy duck pancakes, but with deep-fried tofu (like the type you get with inari sushi) instead of the duck. These came pre-rolled, which is a bit of a shame since usually part of the fun of this is customising it with your preferred ratio of cucumber, hoisin sauce, etc. They were also rolled slightly more loosely than optimal.

Onigiri (£3.50 for two) were packaged with the nori separate to keep it crisp, which was a nice touch. The rice was fine, and the filling of shiitake mushrooms and Japanese pickles was quite tasty.

Unusually for a sushi place, Feng Sushi offer a few brown rice options. Avocado brown rice maki (£4 for six pieces) wasn't bad. The rice was a little stodgy/mushy, and could have done with a bit more seasoning, but the avocado was fresh. I'd order these again. Omelette nigiri (£2.75 for two pieces), made with white rice, also had very underseasoned rice, if it was seasoned at all.

Borough deluxe sashimi (£16 for 15 pieces) was overall quite good, with the salmon and tuna seared just enough to give flavour without cooking through. Sea bass was served curled around salmon eggs, which worked quite well. The only downsides were a small bone in one of the pieces of sea bass, and some rather unpleasant "chilli jam" on the yellowtail.

Kake's verdict: I'd order from here again, but I'd avoid the hot dishes.