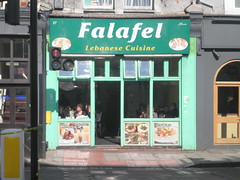 A Lebanese cafe and takeaway on Camberwell Church Street. It used to be called Taste London photo but is now called Falafel.