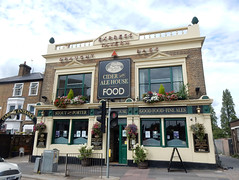 Pub in Brentford near Kew Bridge Station, also known as the Express Ale & Cider House. It's run by the same people as the Sussex Arms in Twickenham, who took over in late 2014.

It's divided into a few different areas inside, offering a fair amount of seating space while retaining a cosy feel. Bare floorboards are underfoot, and the walls are half-panelled, painted in a neutral colour. Lantern-style lights hang from the ceiling, and stained-glass screens are mounted on wooden room dividers. There's a fairly large beer garden out the back.

Kake and bob visited on a Saturday afternoon in August 2015. It was quite busy when we arrived around 1:45pm, though there were still free tables inside — a lot of people were in the garden enjoying the good weather. Music was playing (on vinyl), almost but not quite loud enough to impede conversation.

According to a board outside in August 2015, the lunch menu photo is served 11am-5pm Mon-Sat, the main menu is served noon-10pm Mon-Sat, and they do roast lunches on Sundays. On our visit they also had multiple flavours of pork scratchings.

According to a sign in the window in August 2015, there's a quiz every Monday from 8pm.

Child-friendliness: A sign on the frontage states that families (presumably including ones with children in) are welcome. There were several children in on our visit. They have at least two high chairs. There are nappy change facilities in the accessible toilet.