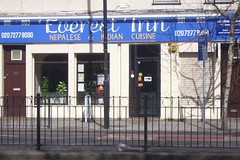 Everest Inn was a Nepalese restaurant on Old Kent Road. According to Google Street View, it closed down by May 2014.

Nepalese restaurant on Old Kent Road. They also do takeaway and delivery, and they have another branch in Blackheath.

Kake, doop, Juliet, and secretlondon have all noted that they can be quite slow to deliver — over an hour, or even up to an hour and a half — and although they sometimes phone to warn you they're running late, this doesn't always happen.

Even the side dishes are very good in and of themselves: both the fresh bhindi and fresh courgettes would work quite well as mains; in general, the vegetable dishes highlight and make great use of the flavour and texture of the vegetables, rather than being some-random-vegetable-in-curry-sauce affairs. The lemon rice is worth trying just for the little bits of lemon rind found within (NB as of June 2009 the lemon rice is no longer on the menu; doop is very unhappy about this).

Bob found the keema naan to be relatively standard, but thought that the pepper rice made a nice change from normal rice. He could taste the yoghurt in his main dish (though the identity of this dish has been lost in the mists of time).

Comment added by Juliet: They seem to be generally pretty slow to deliver (up to an hr, or even just over) but it's worth the wait. Nothing like as greasy as other local delivery places, and more interesting veggie stuff. Fairly sure it's vegan-friendly as I've never felt unwell from it, but I haven't actually asked.

You can order online from their website, from Just-Eat, or from Hungry House. Note that even if you order online, they will phone you up and insist on reading your entire order back to you (this isn't a one-off; Kake and household order from them quite often and they do it every time). (secretlondon has never had this fwiw).

secretlondon has waited an hour and a half for a delivery! The house special karahi was lovely, the gurkhali, described as "fairly hot!" was very hot. Still the best curry that delivers to SE5. Just Eat charges £2 delivery below £12, cusinenet which is linked from their website has minimum order of £15. The last time secretlondon ordered it actually arrived on time!