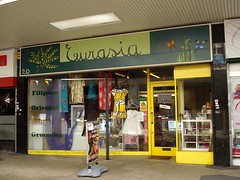 Eurasia was a small Filipino grocery shop (and clothes shop) on St George's Walk in Croydon, previously known as SM Pinoy photo. It has now closed.

As of March 2014 there's a bailiff's notice in the window photo.

Small Filipino grocery shop (and clothes shop) on St George's Walk in Croydon. It was previously known as SM Pinoy photo, but underwent a change of name and management in mid-2013. However, there was no change in the food items stocked, and it generally seems to be much the same as before except that it now sells women's clothes as well.

Despite its location in a somewhat bleak and tucked-away shopping mall (the site of a planned regeneration project that never came to fruition), this little shop is well worth a visit for those with an interest in the cuisine of the Philippines.

When Kake visited in July 2012, notable items in stock included:

Many of these were still in evidence in October 2013, after the change of management, though Kake only specifically looked for pig's blood, roasted corn, and Longkou noodles.

Accessibility: No step to get in, and although the space is small it's relatively uncluttered.