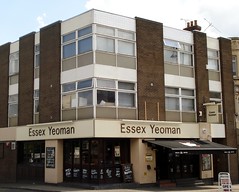 The Essex Yeoman was a pub near Upminster Station, owned and run by the Spirit Group/Punch Pub Company. It has now closed. As of September 2016 the premises are occupied by a Greene King pub called The Junction photo.

Pub near Upminster Station, owned and run by the Spirit Group/Punch Pub Company.

It's a fairly standard closest-to-the-station pub, with plenty of space, upright chairs at varnished square/rectangular tables, and a slightly worn and stained carpet on the floor. There's a pool table, and at least two flatscreens.

Kake visited on a Monday afternoon in June 2009. The handpulls on the bar advertised Bombardier and Courage Best, but I had a pint of lime and soda (84p). The flatscreens were showing cricket with the sound up fairly loud, and there was also piped music playing in competition with it.

A few other customers were in, possibly also sheltering from the thunderstorm that was going on at the time. Service was friendly enough.

As of June 2009, food is served noon-8pm Mon-Fri, noon-9pm Sat, and noon-5pm Sun. I didn't try any of it, but the selection looked fairly standard and the menu seemed to be a chain-wide one. Bargain-hunters may be interested in their "Midweek Saver" menu, with meals from £3.50 Monday-Friday photo.

Accessibility: Two steps up to get in, and some of the seating is up on a dais. Didn't check the toilets.