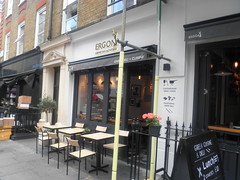 Was a Greek restaurant and deli in Marylebone, closed in summer 2015 (the site is now a Mexican restaurant). A new branch opened on Regent Street in November 2015, which seems to have more of an informal cafe/deli vibe than a sit-down restaurant. The info for the old location is kept below for reference:

Greek restaurant and delicatessen in Marylebone, between St Christopher's Place and Selfridges.

The restaurant is on the ground floor, split into two halves on slightly different levels (with a couple of tables oddly straddling the step). The full length front windows are opened in the summer, contributing to the light and airy feel. Like many of the restaurants in the area there are a couple of tables outside at the front to entice tourists. The delicatessen meanwhile is hidden away downstairs, and features a vast range of things in jars which we didn't look too closely at.

Kat visited with her parents on a Friday lunchtime in June 2014. There were a few other occupied tables but mostly outside in the sunshine — indoors it was fairly quiet.

We opted for a few sharing plates to start, with mains ordered from the lunch menu (all £10, with different accompanying salads included). Ntolmadakia (dolomades, £6 for 6) were bite-sized and delicious, and the vine leaves weren't too stringy. Goat cheese pies (£7 for three) were also lovely and salty.

The smoked pork pasta main (with a huge vat of greek salad) was basically a very olive-oil-heavy carbonara with extra red peppers, which suited me fine, though it came in a saucepan which looked good but made it quite tricky to eat. I'd probably order the chicken souvlaki (with couscous salad) next time, as Dad's looked great and was apparently very tasty.

Service was helpful and friendly if a little slow/erratic: our roasted aubergine starter never materialised (it didn't appear on the bill either) and I was brought the wrong salad with my main course (and didn't notice at first!), however the correct one was quickly brought out as well, and I wasn't charged extra for absent-mindedly scoffing both of them. The bill came to £56 for 3, including service, bread and a glass of house white (£5). I think this was reasonable for the area, and the amount and quality of food we got.

Kat's verdict: I would probably return, as the lunch menu is good value for money. The starters are definitely more exciting than the mains, though.

Accessibility: As well as a step to get in, there are a couple of unexpected steps within the restaurant so I'd take care. The deli and (unisex) toilets are down a flight of stairs with a handrail on one side. The toilets also have an extra couple of seemingly-pointless steps in them.