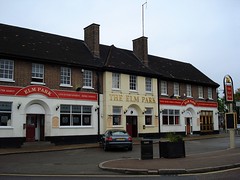 The Elm Park was a large pub just down the road from Elm Park Station, on the corner of Elm Park Avenue and St Nicholas Avenue. It closed in February 2013 according to the Aug/Sep 2013 issue of London Drinker.

Kake visited on a Wednesday afternoon in September 2008. The place has a couple of entrances, which confused me slightly, but I eventually chose the one on the far left, which led me into a large open room with polished floorboards, banquette seating around the edges, a large rectangular bar, what looked like a DJ station to one side, and a little island of fruit machines sitting in the middle of the floor. A3 prints of flowers on the walls as well; quite nice, really. There were a couple of (well behaved enough) dogs wandering around as well, so it seems to be dog-friendly. I also noticed some kind of beer garden out the back.

When I arrived shortly before 5pm there were four or five other customers in, having a lively conversation with the barmaid, and a few more turned up while I was there. Piped music was playing, though not excessively loudly.

Although they have one handpump on the bar, it had no clip or driptray, so I suspect it's never used. I had a half of Strongbow (£1.45). I spotted a few clingfilm-wrapped filled rolls behind the bar; I don't know what the food situation is in general, but I think there's a restaurant attached to the pub (no idea of opening hours).

Accessibility: Couple of fairly high steps up to get in, but level access to seating, bar, and toilets once you're in (at least in the room I was in).