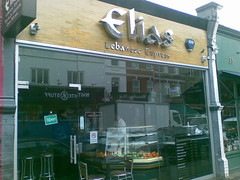 Elias was a Lebanese restaurant and takeaway near Turnham Green Station. According to Google Street View, it closed down by August 2014.

bob has been there several times. The first time I had the lamb shawarma meal for £6 photo. It was very good. The next time I went I had the kafta meal for the same price photo. This was less good but still very tasty. The sambousek was a touch overcooked and the kafta while tasty wasnt as abundant as the shawarma. I also had a portion of extra chips at £1.50, and tried the apple, carrot & ginger juice at £2.50. This was okay. According to the menu they also do apple, spinach & ginger juice, though this was unavailable on my visit.

I have tried many things on the menu now. None of them have been disappointing.