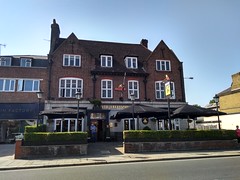 The inside is divided into two halves. The one on the left, entered from the front of the pub, is almost like someone's living room — in a good way; worn rugs on polished floorboards, comfortable brown leather sofas, and a spacious feel. There's seating outside for the smokers, covered with large umbrellas.

When Kake visited on a Wednesday early evening in September 2008, the left-hand side of the bar was quite peaceful; there were about half a dozen other people in, reading the newspaper or having quiet conversations. The other side of the pub sounded a good bit livelier. Music was playing quietly.

There's a Thai restaurant upstairs, and food from here can be ordered at the bar to be served anywhere in the pub. According to the Elephant Inn website as of June 2019, food is served noon-4pm and 6pm-10pm Mon-Thu, and noon-10pm Fri-Sun.

Accessibility: Step-free access to one half of the bar, and to the toilets here. Small step internally to the other side.