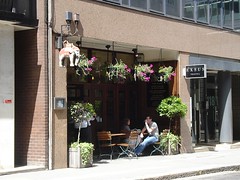 The Elephant was a Young's pub in the City. According to the Dec 2014 London Drinker, it closed in October 2014 and will be demolished along with the office block above it.

Young's pub in the City. Note that it's closed at weekends.

Food is served 11am-3pm Monday to Friday. The menu includes pie; you can get a quarter, a half, or a whole pie, with various accompaniments.

The ground floor is quite small, with a wipe-clean vinyl floor, and fairly obviously intended for people popping in for a quick vertically-drunk pint after work. There's a bookable function room in the basement.

Bob's verdict: Wouldn't go out of my way, but would pop in for a pint if passing.