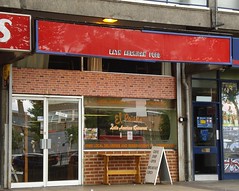 Latin American restaurant on Newington Butts at Elephant and Castle. It's underneath one of the blocks on the southernmost roundabout, near Castle House.

It's small, with wooden tables and seats inside. There's some outside seating too, and the main room has stairs going up which may lead to extra seating.

secretlondon went in at 6pm on a Friday in August 2008 to see what they had. Half of the menu was Spanish-only, and the other half was in Spanish with English underneath, so it was a bit tricky to identify what things were. Some tables had cards on advertising roast chicken and breakfasts - these were only in Spanish. I was the only non-Spanish speaker in the building!

They didn't have my first choice, and they didn't seem to have any tea either. Instead, I went for the special meal (available from Monday to Friday) which was £5 for soup and a choice of three main courses. The soup was made from kidney beans but had an unidentified cut of meat (offal?) in it too. The main course choices were chopped liver, pork belly, or roast chicken; I chose the fried pork belly which came with plantain, rice, salad, and a potato photo. It was good value, and filling.

There was a television in the background playing Latin American music, and judging by the atmosphere I'd say this was authentic Latin American food for the local Latin American community. I'd certainly come back, but maybe I'd do some research first and bring a dictionary. I might avoid bringing vegetarians though.

They will deliver locally, according to a sign seen in the window in May 2009.