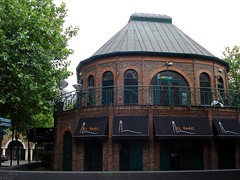 Now closed; was a Spanish/tapas restaurant near Crossharbour Station on the Isle of Dogs.

Good Spanish/tapas restaurant near Crossharbour Station on the Isle of Dogs.

The interior is modern and smart without being fussy. The two-person tables are fairly small, necessitating a fair bit of shuffling if you're having tapas. The main dining area is on the ground floor (toilets are upstairs), but there's another room upstairs which I think you can book, and an outside terrace looking on to the river (although Millwall Dock is perhaps not the most attractive stretch of the Thames).

You can do the full starter-main-dessert thing, or just have tapas. They offer 24-hour roasted suckling pig, flown in from Spain, and the interweb suggest they do good steak - but we've not tried either of these yet, having always gone for the tapas option. (Note that the T-bone steak is priced on the menu per 500g, rather than per steak, so make sure you check the weight of the steak you're being offered if you don't want a surprise when the bill comes.)

Kake has visited three times now, in various company. A Wednesday evening visit in September 2007 and a Thursday evening visit in December 2007 (both times arriving around 8pm-9pm) gave us no trouble with getting a table for two without booking; however, we were glad that we'd booked for our August 2008 visit (a table for three this time) as although the place was fairly empty when we arrived at 7pm, all the tables we could see had "reserved" signs on, and it filled up pretty quickly.

Dos Hermanos (linked below) rave about the jamon iberico, but despite having tried it on all three visits, Kake remains unimpressed. The tomato-rubbed toast that accompanies it, on the other hand, has always been very good; the price of the ham means that this dish is quite expensive (£14.50), and I do wonder if it would be possible to just get the tomato toast on its own.

Other recommendations from Kake:

If going for the tapas option, you probably want between three and five dishes apiece, depending on how hungry you are (Kake and doop had seven plus bread between us; Kake and bob had nine plus bread between us; and Kake, Juliette, and Jon had ten between us, without bread but including an enormous portion of patatas bravas). It's perfectly fine to order a few to begin with and then order more later on.

Service is generally friendly and helpful; they're happy to help you choose wine, and when we decided to finish with some sherry they brought us three samples to help us decide. Jugs of tap water are supplied on request.

Getting here: Unless you fancy the (not unpleasant) 15-20 minute walk from Canary Wharf Tube Station, you'll have to use the DLR to get here, but really, that's no great hardship, and the restaurant is literally seconds from Crossharbour Station.