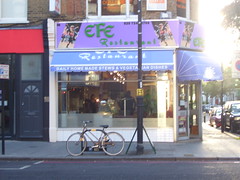 Efe was a Turkish cafe in Stoke Newington. It closed at the end of 2010. As of February 2011 the premises are occupied by a kebab shop called Capital C.

This little cafe has been recently re-opened after being closed for refurbishment and applying for a later opening license. They serve traditional Turkish breakfasts including Melemen (a Turkish omlette) and some Yumurta (egg) dishes along with coffees and teas.

Lunch/dinner menus include the usual kebabs, a variety of pancakes (all vegetarian), soups, chips and bread/hummous. The awning outside advertises 'vegetarian stews' but I didn't see anything on the menu.

Bec and Glynnis visited in October 2010 in the evening, when the menu seemed to be very trimmed down. Glynnis had the Ispankli (spinach pancake) and Bec had the Patatesli (potato pancake). Both pancakes were delicious and filling, and at £2.00 a real bargain. The Patatesli was nicely spiced and the Ispankli was crammed with delicious spinach. We also had hummmous and bread for £1.50 — the hummous was perfection, the bread a bit dried out.

This is probably a better lunch than evening meal option, though as it stays open quite late for the kebab and chip crowd it seems that not all the menu items are available during the evening (we first asked for a feta filled pancake but only spinach and potato were being served - they also offer spinach & cheese and spinach and mushroom).

The friendly service and cheap, tasty food make Efe stand out among the dozens of Turkish cafes with its traditional menu and veggie options. I will visit again during the day to sample the Merimek (red lentil soup) and try another pancake from a fuller menu.