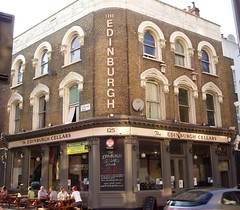 Now closed; was a pub on Newington Green, near Canonbury Station. As of March 2010 news is that it's gone into liquidation, though it since reopened as The Cellars.

A pub on Newington Green, near Canonbury Station.

In the front room is the bar, with a DJ booth area in the corner, bare floors, and some tables around the walls for seating. The second room is much larger, with plenty of tables and couches. There is also some outdoor seating available.

The bar has four handpulls, with London Pride available (though the Greene King IPA was off on Ewan's visit). They also have a range of draught lagers, including Staropramen (£3.70/pint) and Hoegaarden, and Aspall's cider, in addition to bottled beers and ciders. A cocktail list is prominently chalked above the bar photo of bar.

There are DJs on Thursdays, Fridays and Saturdays, so the place can get pretty noisy on these peak nights, but the bar staff are friendly. The large room can be booked for functions and parties (though it's freely accessible from the main bar).