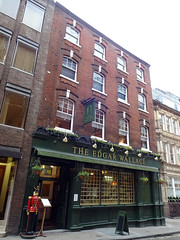 The main bar on the ground floor is fairly small, with a mix of seating including a couple of armchairs. It generally starts to fill up between 5pm and 5:30pm every evening, and by 5:30pm one would struggle to find a seat — though it does quieten down later. There's also a bookable function room upstairs, which can seat about 20 comfortably and has a limit of 45 people due to fire regulations.

The ceiling is covered with old beermats and pump badges, and the walls with old advertising material, including a line of flickering, illuminated cigarette adverts and a slowly-rotating "Long Life Beer" branded lamp. Small-paned windows with old-school thick, imperfect glass allow in a little daylight while shielding drinkers from the gaze of the outside world.

Lauded in the early days of this guide (2007-2008) as "a must-visit location for fans of real ale" with "very drinkable" beer, it remains worth a visit, though the size and diversity of the ale selection seem to have declined somewhat over the years. On our most recent visit in March 2016, only five of the eight handpumps were in service, almost all offering the currently-fashionable paler ales, including Rudgate Barristers Brief and Mauldons Dickens — the darkest beer available was Harvey's Sussex Best. However, the staff were knowledgeable about the beers, and happy to offer multiple tasters.

Food is served, possibly all day. In March 2016, Kake's all-day brunch (£9.50) photo was fine, with good quality ingredients cooked competently, proper runny yolks on the fried eggs, and plenty of black pepper in the sausage.

It's worth noting that, like many other pubs in the area, they're closed at the weekend. Also, according to notices on the tables in March 2016, laptop use is not permitted photo.

Accessibility: A tiny step at the Essex Street entrance and a larger step at the side entrance. Toilets are up a flight of stairs with a sturdy handrail.