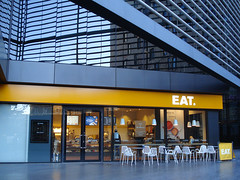 This was a branch of Eat, a sandwich/soup/pie/salad/coffee shop chain that was sold to Pret A Manger in 2019 and closed down for good in March 2020.

This branch opened in late July 2011 in More London, in the place of the former Cafe Amore. It is next to Marks and Spencers and two doors along from Caffe Nero.

secretlondon tried to visit one weekday lunchtime after it had just opened and was dissuaded by a queue out of the door. I then visited one weekday evening at 6.30pm, after the closing time on the door outside!

It has some inside seating — a long table and some bar stools. It also has a number of tables on the pavement outside with ash trays. There is no toilet. There was plenty of room to sit down but it was late — I expect you would struggle at peak times, at least until the novelty has worn off.

There is free wifi from The Cloud which needs registration according to the flyers, but I couldn't find the access point on my phone from my table.

The food and drink is standard across Eat branches and changes with the seasons. I had a large fruit salad and a mango and lime chiller which came to £6.04.