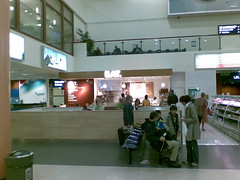 Branch of the EAT chain at London City Airport; now closed. According to a member of staff at the airport information desk, it closed at some point prior to mid-2011.

On the bar-like seating facing into the airport's circulating area there is an exposed double mains socket just to the right of the enclosed bins.