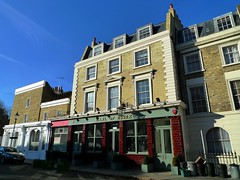 An upmarket "craft beer" pub in Islington with brewing kit located behind the bar (though not yet at the point of offering their own beer as of January 2013).

Inside this former Watney's house (still with its Watneys-branded bar back, attractively scrubbed up and illuminated) is a large room with an island bar in the middle, effectively splitting it into two sides. The rear of the central bar is taken up by brewing kit, so there is only service at the front (although there is still a bar there for those standing to rest their drinks on). There are large solid wooden tables around the edge of each room, with uncushioned wooden banquettes along the walls.

The bar itself features six cask ale handpulls, and 14 keg taps, none of them badged, as they all change regularly. The beer list itself is displayed on a side wall on an attractive wooden board (with no branding and listing only the beers' names, alcoholic strength and price, and whether they come from cask or keg dispense) photo. Further notes on beers are provided in printed menus which are on every table and on either end of the bar, and staff are happy to give tasters. There is also an extensive bottled selection from a variety of world brewers, though still featuring some of the familiar "craft beer" brewers (Denmark's Mikkeller, Netherlands' De Molen, Oregon USA's Rogue, and the like). Cask ales hover around £4 a pint, while the draught keg beers go up in price from there (Camden Hells is £4/pint and Camden Ink £4.20/pint, while the most expensive on Ewan's January 2013 visit is a Stone Smoked Porter for £3.50/half). The bar also serves drinks in third-pint measures.

Food is served 3pm-9pm Mondays, and noon-9pm Tuesdays to Sundays. The food menu features some familiar pub dishes (fish and chips, steaks, burgers) but with plenty of touches showing a commitment to good quality sourcing and some more interesting dishes as well. Mains are around £10 each.

There's a large beer garden down some steps to the rear of the pub.

On Ewan's Friday evening visit in January 2013, the place was pretty empty at 5pm, but became quite packed by 6pm, with all the tables taken and a crowd around the bar. Still, even sitting at a table to the side of the front room, the noise was not overwhelming and it came across as a pleasant pub to drink in. Music was playing, but not too loudly.

Accessibility: There is a very shallow step to get in but the interior area is all on one level. Toilets are located downstairs, and the beer garden is down some steps to the rear.