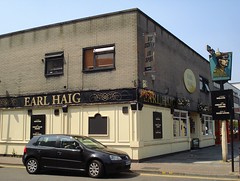 The Earl Haig was a pub in Hounslow. It has now closed and been replaced by anothr business called Keg & Cask Pub.

Pub in Hounslow, run by the Original Pub Company.

It's fairly big inside, though much of this is standing room only, and seating is relatively sparse. The decor is very traditional — upholstered banquettes, dado rail, patterned carpet — and in general quite shabby ("neglected" rather than "shabby chic"). The walls are decorated with various portraits of Earl Haig himself, along with items such as a mirror embossed with the words "Tanners Pub Co".

The seats at the front have a good view of low-flying planes over Hounslow West Station, which is directly opposite. At the far end there's an area with three pool tables. There are several games machines throughout the pub, and a cabinet on one wall which might conceal a dartboard. There's at least one flatscreen.

There are no handpumps on the bar, just keg fonts for the usual range of lagers and things.

Kake visited on a Wednesday lunchtime in July 2013. There were a handful of other customers in when I arrived around 12:45pm. Music was playing, a little louder than ideal, but not loud enough to seriously impede conversation. The flatscreen was showing some kind of TV programme with the sound off. Service was friendly. A glass of lime and soda (I asked for a half-pint, but I think it was actually more) was 37p.

They don't do food; in July 2013 a member of staff said they stopped doing it "about a year ago".

Note that as of July 2013 the Earl Haig doesn't appear on the Original Pub Company website, but I was given a feedback form with their URL on, so they do seem to still own it.

Accessibility: Step-free to get in, to the bar, to some of the seating, and to the toilets. The rest of the seating is on daises, and I think there are also steps to the pool tables.