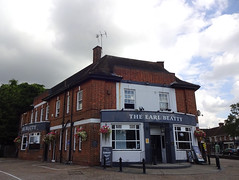 Greene King pub in Motspur Park (though the Greene King website claims it to be in New Malden).

The large interior has been opened out, but retains the vestiges of separating walls. There are still a number of definite areas, each with its own ambience, including a side room with a pool table and dartboard. A central bar curves around to provide service from several sides.

A piano stands in one corner, and the darker, cosier area towards the back is also home to a couple of fruit/quiz machines. Large windows in most areas provide plenty of natural light. Flooring is a mix of bare boards and flagstones, and paintwork and wallpaper are mainly in shades of grey.

Kake visited on a Tuesday lunchtime in September 2019. There were four or five other customers when I arrived a little before 12:30pm. Music was playing, not too loud. Sky Sports News was showing silently on a flatscreen. Service was very polite.

The handpumps were clipped for four Greene King ales: IPA, Abbot Ale, Yardbird, and Old Golden Hen. A pint of lime and soda was 78p.

According to a notice seen in September 2019, there's a quiz every Sunday from 7:30pm.

Accessibility: A step to get in. Most of the seating is on the level once you're in, though some is on a dais. Toilets not checked.