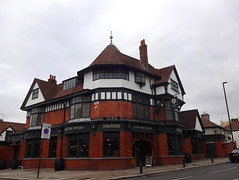 The Ealing Park Tavern was a pub in Ealing, run by the ETM group. According to the Ealing Today website, it closed down around the start of 2020 due to the landlords taking back the lease.

Pub in Ealing. It was reopened by the ETM group as a gastropub in early 2015.

It's quite large inside, with several distinct areas. Entry is into a spacious bar area, with tall clear windows letting in plenty of light and giving a view of the recreation ground across the road. Exposed brickwork adds interest, along with the stuffed animal heads that gaze down from above the bar and fireplace. Seating is padded banquettes, stools, and upright chairs, while the wooden tables are varnished to a high gloss.

A doorway next to the entrance leads through to a smaller, cosier space, and beyond this is a restaurant area. Around the curve of the bar, a wood-panelled area with smaller, dimpled-glass windows offers a more clubby feel, aided by two long communal tables. A door from here leads out to some sort of garden.

Kake visited on a Monday lunchtime in January 2019. Arriving at their opening time of noon, I was the only customer, though a couple more turned up about 15 minutes later. Music was playing, slightly louder than would have been ideal for conversation, and there was also a fair bit of loud banter audible from the kitchen.

Although the pub has its own microbrewery operating under the name of Long Arm Brewing Co, only two of the five handpumps were clipped, offering Sambrook's Wandle and Pumphouse. A pint of lime and soda was £2, made with two small bottles.

Food is served. In January 2019, Kake's "dayboat fishcake" with poached egg and mustard sauce (£12.50) photo was very small for a main — it was more like a starter. Even with a side dish of green beans (£3) it wasn't really enough for lunch. However, the quality was generally good. The cod and salmon in the fishcake were thoroughly cooked, giving a nice chewy contrast to the soft-textured potato. The poached egg was competent, and the mustard cream sauce just the right amount of assertive. The green beans were sauteed with well-caramelised shallots, and were nicely handled except that a few of them were a bit stringy.

Child-friendliness: They have a short but relatively interesting children's menu. There's a pull-down nappy change in one of the ladies' cubicles (gents' not checked).

Accessibility: No steps to get in, and no steps to the toilets, though the toilet door is a bit heavy.