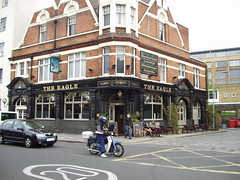 Gastropub just off City Road, a little northwest of Old Street Station. It's part of the Mitchells & Butlers Castle sub-chain.

Kerry and a friend visited on a Thursday night in May 2011, when there were four real ales on (Deuchars IPA, Doom Bar, Thornbridge Ashford and Caingorm Trade Winds) as well as the usual run of lagers, Hoegaarden and Guinness. The Ashford was well kept and drinks were reasonably priced for the location, a total of Â£5.20 for a half of ale and a G&T. Bar staff were very friendly and efficient, and were happy to discuss the different ales and offer tastes even though the bar area was fairly busy.

bob and others visited in October 2007. The beer was very drinkable, and served in mugs. The selection had previously included Black Cat. I think they have real cider on as well.

The food is gastropubby, but variable; it keeps changing in quality and variety. The lamb steak and couscous has been noted as being quite good, and the lemon tart as being well-executed. As of October 2007, the burgers are still good, but the steak was mediocre.

For those who prefer bar snacks, it's worth noting that they stock wasabi peas.