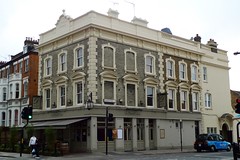 It's quite large inside, with entry into an airy front room. A booth-lined "corridor" with a notably ornate ceiling leads back past the bar to a large room at the back, this one with a pull-down projection screen and a sort of offset skylight thing. There's also some outside seating at the front, partially shielded from the road by a raised bed of bamboo and other such plants.

Kake and bob visited on a Saturday afternoon in August 2015. They were showing football on the flatscreen in the main bar area and the projection screen in the back room, but the place wasn't overly busy.

Three of the five handpumps were on, offering Sharp's Coaster, Ascot Ales Alligator Ale (£3.70/pint, £1.95/half), and Twickenham Naked Ladies.

According to their website as of August 2015, food is served noon-9:30pm Mon-Sat and noon-9pm Sun, and quiz night is Tuesday from 8pm.

Accessibility: No steps to get in, or to the outside seating at the front. Most of the seating is on the level, but the booths are on a dais up a large step. Step-free to the accessible toilet. At least one of the gents' toilets has a step to the cubicle.