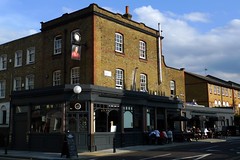 A decent pub not too far from Dalston Kingsland Station, to the north of De Beauvoir Town. It changed ownership in early 2009, and has been refurbished and the name restored from The Wellington to its original aristocratic name.

Inside, the bar takes up a large amount of space in the centre of the main room, around which are arrayed tables at various heights, and some comfortable sofas on either side. Out back is a large function room space with doors open to the street outside and brightly lit (and brightly wallpapered), also laid out with couches for drinking, and in which there's generally plenty of space.

There are four handpulls at either end of the bar. On an August 2009 visit, the pub was hosting a beer festival, so all eight had guest ales (though Sambrook's Wandle may be a regular), and the back room had more casks on gravity. The ale range changes on a regular basis, and there's always been something different available in Ewan's experience. There's a decent selection of other draught lagers including Staropramen and Leffe, as well as a good range of spirits and a few wines.

Food is served 5:30pm-10pm Monday to Friday, noon-10pm Saturday and noon-8pm Sunday. There's a full menu chalked out on boards around the pub, a bit more interesting than the standard pub grub photo of Sunday lunch menu from September 2010. In November 2009, Ewan's starter of mushrooms on toast (£4) photo was simple but tasty, with good quality mushrooms. In September 2010, Kake's roast chicken with bread sauce (£11 including roast potatoes, cabbage, carrots, and gravy) photo was pretty good; the chicken wasn't dry at all and had very flavourful skin, the bread sauce was nicely nutmeggy, the cabbage was only lightly cooked, and th gravy was tasty. bob's braised lamb shoulder (£13 including the abovementioned trimmings) photo was cooked just right, not overdone. Ewan was quite happy with the blackberry crumble (£4.50) photo, served with a generous jug of cream.

They also have snacks available to the side of the bar including home-made pasties; in August 2009, Ewan's vegetarian one was filled with lentils and feta, and was very tasty indeed (around £2.25).

The atmosphere was convivial on Ewan's August 2009 visit, with plenty of drinkers enjoying the sun and the ales. On our Sunday lunchtime visit as part of the September 2010 38 bus route pub crawl, there was no room to sit inside, partly because the back room was full of people watching football, but we found space on the picnic benches outside.

Accessibility: A couple of small steps down to get in.