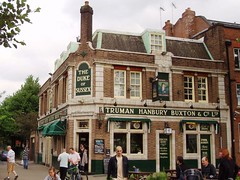 Pub not far from Waterloo Station.

Note: The Duke of Sussex has changed hands since our visit, and is apparently somewhat different now. Some or all of the details below may be out of date.

It may be a locals' pub, but for this area that makes for a fairly pleasant change. There are two or three large booths along the side with banquette seating which would sit a good number of people, as well as an area at the back behind the bar with several tables. There's a separate room (the old public bar), which has only a few very small tables and chairs, as well as a pool table (covered up on our visit).

In the main bar is a stage area where they do karaoke several nights a week (including Friday night).

On the bar are three handpulls for ale, with London Pride and one other on, apparently a guest ale. On our February 2009 visit it was hand-labelled as "Shepherd's Neame" [sic] (£2.60/pint), though it was perfectly fine. The Pride was definitely a bit off, though. They also have the standard lagers on draught and some bottled beer.

Service is friendly and on a Friday evening, there was still space enough to get a seat, though it got a bit more full by 7pm or so, but not unpleasantly packed. On the whole, it's a good place for a few drinks. (Unfortunately a fight broke out down one end of the pub while we were there, but it was soon moved outside and the bar staff were apologetic.)

Not much sign of food on offer, though a chalkboard listed a few basic things which may be available at lunchtime.