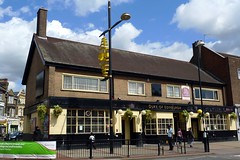 The Duke of Edinburgh was a pub near Upton Park Station. According to the Feb/Mar 2015 London Drinker, it closed in May 2014 and a planning application was submitted for conversion to shops. As of July 2016 it's a clothes shop photo.

The interior comprises a single long rectangular carpeted space, broken up by some pillars and laid out with chairs and tables at the edges, with a few more in the middle of the floor. Decor is fairly basic however, and one suspects that on match days at the nearby Boleyn Ground, the space in the middle is cleared for football fans.

There's an advertised beer garden out the back, but this is little more than an enlarged, concreted car park area with some picnic tables for seating.

The bar has no ales, but a large number of keg taps with the usual range of lagers (Foster's, Stella, and the like), as well as keg John Smith's.

There are five or so large screens showing sports (darts on Ewan and Kake's July 2009 visit), and two pool tables.

Accessibility: One step up to get in. Didn't check the toilets.