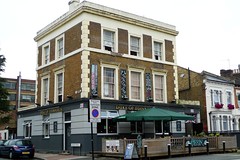 The Duke of Edinburgh was a locals' backstreet pub in Wood Green. According to Google Street View, by June 2017 it had been replaced by a shisha bar called Matizz.

This veteran pub has clearly been refurbished in the last few years, in a way that slants it towards a more youthful clientele. On Ewan's Tuesday evening visit there were only a handful of people there, all in their early-20s.

An L-shaped room curves around the bar, with long tables backed by banquettes along the two walls, and a combination of deep modern leatherette sofas and capacious armchairs. (There are no small tables or high tables with stools.)

In the corner of the room is a small raised stage area, backed by a large plasma screen (of which there's another at the end of the room around the corner from the entrance). On Ewan's visit it was showing music videos with the sound on (but not too loud). There's also a pool table just inside the front door. Out the front is a large area of decking with a canopy covering most of it.

There are no ale handpulls at the bar. Fonts for Staropramen (£3.20/pint), Beck's Vier and Guinness sit alongside the usual cooking lagers.

Food is served under the banner "Cirrik at the Duke of Edinburgh", and features mostly Turkish cuisine (kebabs, and hot and cold meze), with a few English options. The hot meze platter (£6.95) photo is a large round portioned plate with fried halloumi, Turkish sausage, and other fried items, with hummous in the centre and a separate bowl of warm flatbread. Ewan found it to be perfectly filling fare.