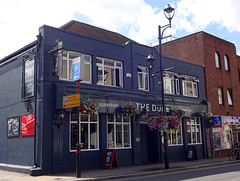 It's been furnished with prominent red ventilation in the ceiling, in a kind of industrial style.

secretlondon visited one Tuesday night in September 2016. We'd intended to go to the Victoria opposite, but it was closed. All four hand pumps were on, with a mixture of Greene King and local beers: Wimbledon Common Pale Ale, Twickenham Naked Ladies, Greene King London Glory, and another Greene King (probably IPA, I forget).

They sell food of the gastropub variety (mains start at about a tenner).

Accessibility: Toilets are upstairs. I don't know if there was an accessible one downstairs.