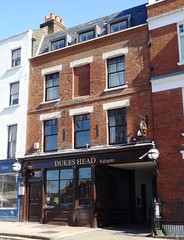 Inside, this is a long thin space with stone flooring and sturdy wooden furniture. There are a couple of large tables up the front by the windows, then about four more down the back, with smaller tables along the wall and the bar in the middle. Staff are friendly and knowledgeable about the beers on offer.

The bar has 10 handpumps (with eight for beer, and two for cider), and they only serve British beers, including kegged and canned craft beer. They also specialise in gin cocktails made with the locally-distilled Sacred Gin. There's a good range of regularly changing casks and kegs, listed on a chalkboard above the bar (and another on one of the roof beams), which has featured beers from a range of 'craft' and small independent breweries including Hackney's Five Points, Tottenham's Beavertown and Hanwell's Weird Beard amongst many others. Cans of Beavertown are always regular in the fridge with plenty of others.

According to their website as of August 2015, food is served noon-10pm Mon-Sun, with a different street food vendor running the kitchen each month, sometimes with a few days off in between for handover.