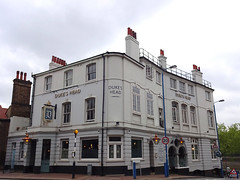 Young's pub in Putney. It's one of their gastropub affairs with a bar area and a dining area, as well as a bookable function room on the first floor and a cocktail bar in the basement.

The bar area photo has dark red walls with old-gold detailing above a dado rail near the dark grey-green ceiling. The floor is dark-varnished exposed floorboards, scuffed and pitted, aside from an area of small square tiles surrounding the island bar. The variously-shaped tables gain some level of uniformity from being stained a similar colour to each other — and indeed to the wooden chairs which provide most of the seating (aside from a brown leather banquette along one wall). The obligatory photo of the Queen Mum pulling a pint is joined by one of Prince Charles doing the same, alongside a cabinet clock whose pendulum ticks away. Windows are part-frosted, and chandelier-style lighting hangs from the ceiling.

bob and others visited on a Thursday evening in September 2008. The Young's Special was OK, but several people left their Deuchars.

Kake visited on a Thursday afternoon in August 2009. Ales on handpump were Bombardier, Young's Ordinary, and Kew Gold; they also had Addlestone's cloudy on the fourth handpull. I had a pint of lime and soda (90p). Service was friendly enough. There were only one or two other people in when I arrived at 4:30pm (though a party of half a dozen mums with pushchairs was just leaving). Music was playing, but very quietly.

Accessibility: Step-free into the bar area, and back to the dining area too (the entrance directly into the dining area may have a step, not sure). Not sure about the outside seating. The ladies' and gents' toilets are up a flight of stairs with a bend in the middle and a sturdy but non-continuous handrail on one side, but there's also an accessible toilet (with baby-changing facilities) on the ground floor.