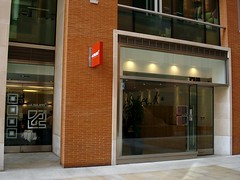 Dsum2 was a dim sum restaurant just off Paternoster Square. It closed some time around August 2009. As of September 2009 there's a pile of old mail accumulating inside the front door, and no indication of what will happen to the site next.

Dim sum restaurant just off Paternoster Square. It seems to be one of the "new-style" dim sum places, like the Ping Pong chain, with stylish decor and cocktails in place of scruffy surroundings and limitless tea.

[Mart]? visited on a Friday evening in early April 2008. The restaurant was bustling and somewhat noisy, making conversation something of a challenge. The menu is varied, but my friends and I decided to go for one of each of the dim sum platters (crisp, steamed, mixed, and vegetarian) along with a bottle of the house white and a couple of Tsing Tao beers.

The food arrived quickly, was presented nicely, and seemed to go down quite well with the rest of the table. It was certainly edible, but I'm not a great fan of dim sum so can't really speak to the quality. The portions were smaller than we expected, and we all ended up ordering an additional item afterwards.

I felt that the food, wine, and beer were all overpriced; our bill worked out to about £38 each. When settling the bill, one of my friends paid in cash. We had to ask twice for the change to be returned to us, as the waiter seemed to assume the change was going to be his tip, even though service is included. I don't think I'll be revisiting any time soon.