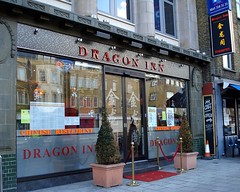 Dragon Inn was a Chinese restaurant on the Old Kent Road, sister of Dragon Castle in Walworth. It closed some time around the start of 2011, and the premises were taken over by Shu Castle, a Sichuan restaurant with a completely different menu (though Shu Castle and Dragon Castle do still appear to be related).

The information below is retained for people who want to know what it used to be like as Dragon Inn.

Chinese restaurant on the Old Kent Road, sister of Dragon Castle in Walworth. They offer takeaway (and delivery within a two-mile radius) and they also do dim sum at lunchtimes.

Kake and bob visited on a Monday evening in March 2010. There were only three other customers (and two of them were reviewers from a local newspaper). No music was playing; instead, they were showing Channel 4 with the sound turned up on a large flatscreen TV.

Sashimi scallops with soy sauce (£6) were fresh enough, and nicely presented in a couple of ice-filled scallop shells, though they were sliced rather raggedly and the ice had already half melted when they were brought to us, leaving them somewhat waterlogged. Deep-fried squid with chilli, garlic, and peppercorn salt (£6.50) was competently fried — neither greasy nor overcooked — but rather lacking in flavour.

Sea-spiced aubergine (£7.80) photo was missing both chilli heat and complexity of flavour (it's a Sichuan dish, and Dragon Inn specialise more in Cantonese food), though at least it wasn't overly greasy as aubergine dishes can often be. Crispy eel with red beancurd and rice wine (£13.50) photo was better, with a nice depth of flavour from the fermented beancurd. Chairman Mao braised pork belly (£9) photo had a good flavour, and although there was perhaps a little more dryness in the meat than is optimal, this was balanced out by the fattier parts of the cut.

Crispy shredded beef (£9.80) photo was better than average; it was actually crispy, which some renditions fail to manage. Stirfried pea shoots with XO sauce (£8.50) photo were good, with plenty of flavour from the XO sauce, including the chilli heat that had been lacking in the aubergine dish.

Kake's verdict: Not sure. The food is certainly a step up from your average high-street Chinese, but it has perhaps a touch less finesse than at Dragon Castle, and the TV was a bit offputting too.

Accessibility: Two steps up to get in, but it's all level once you're in.