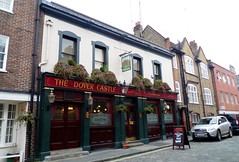 The Dover Castle was a Samuel Smith's pub in Marylebone. It closed down in September 2016.

The information below is retained for historical purpose.

This is a spacious pub with several rooms and a small beer garden smoking area out the back, set just behind Portland Place in Marylebone, done out in the traditional style favoured by Sam Smith's.

The drinks available are the standard range, though they have the Old Brewery Bitter on hand-pulled pumps. Service is good, and the publican was perfectly friendly and approachable.

Food is served noon-2pm, and 6-8:30pm in the evenings according to a board in the pub as of February 2008, a fairly basic range. Ewan tried the vegetarian pie (one of only a few vegetarian options), which was advertised as coming with chips. It was brought out with mash, which the publican picked up on and offered to bring out a bowl of chips for no additional cost, which he did. As it was, the pie went better with the mash, and although the crust was a bit dry, it was still tasty. The chips which came out (and which were served with my companion's sausage, beans and chips) were clearly hand-cut from a potato, and what they lacked in crispiness they made up for in being fresh.

Bec had the egg mayo baguette for £3.25 which was excellent value for money. The baguette was toasted and the egg mayo wasn't overly mayo-y. I also had a side of onion rings for £1.75 which were greasy and fatty and utterly delicious. Ideal for lunches, I should think.