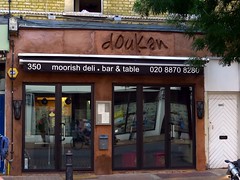 Doukan was a Moroccan restaurant just by Wandsworth Town Station, in Wandsworth. According to their Facebook page it closed in February 2016. As of October 2016 the premises are occupied by a BBQ restaurant called Meatup.

A Moroccan restaurant just by Wandsworth Town Station, in Wandsworth.

This place started on the nearby industrial units as the cafe adjunct to a catering firm, but has now opened in these new premises. There are tables out the front on the street, as well as several large round tables in the front room, and down the stairs at the back. The rear of the restaurant is opened out, with skylights and plenty of natural light, giving it a warm ambience.

They operate different menus for lunch and dinner, with a larger range of small sharing dishes at lunchtime. Apart from the regular evening menu photo of menu in August 2009, they also offer a £25 set menu (called 'The Avalanche', adaptable to vegetarians) which involves some good flatbread and dips (aubergine, hummous and a spicy salsa) photo, followed by a range of vegetarian starters including some crisped-up halloumi chunks on a bed of leaves photo and various other tasty things photo not mentioned on the regular menu. The mains for vegetarians on Ewan's August 2009 visit were the couscous khoudra, a stew served in a traditional earthenware bowl photo, and the tabssil denjal photo, a rather tasty 'eventail of aubergine', with grilled peppers, spicy tomato & coriander sauce and the ubiquitous (but lovely) grilled halloumi cheese.

Ewan's verdict: The set menu also comes with a bottle of reasonable house wine, which makes it very good value. Service is friendly and welcoming. I would happily return.