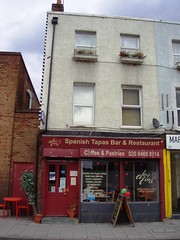 Now closed; was an inexpensive cafe and tapas bar just by Deptford Bridge Station. As of November 2012 the premises were occupied by a Cote d'Ivoire restaurant called Restaurant Le Taliet (see Chowhound thread). As of November 2014 it's being demolished along with its neighbours photo.

The information below is retained for people who want to know what it was like as Dos Tias.

Inexpensive cafe and tapas bar just by Deptford Bridge Station. It's quite small, with only about half a dozen two-person and four-person tables. One suspects that a fair amount of their trade comes from the students of Lewisham College, which is practically next door. Note: Deptford SE8ker warns that their opening hours can be quite variable.

Kake, Ewan, and Jo visited on a Saturday lunchtime in October 2008. There were a few other customers in, and we got the last four-person table, though by the time we left around 2pm the place was empty. Piped music was provided by some radio station or other.

We were initially given the cafe menu photo, which includes only a small tapas section, but when we asked if there was a separate tapas menu it turned out that there in fact was one, with 25 choices of hot and cold tapas dishes including 8 or 9 vegetarian options photo.

Since Ewan and Jo are vegetarian, we decided to get the tortilla espanola (£3.05), patatas bravas (£3.15), champinones (garlic mushrooms; £3.50), pan al ajillo (garlic bread; £1.85), and estofada de lentejas y judias (lentil and butterbean casserole; 3.75), with an extra dish of albondigas (meatballs; £4.45) for Kake photo of three tapas dishes. This latter dish turned out to not be quite ready yet, as the chef was working on a new batch of meatballs, so we asked for the jamon serrano (Spanish ham; £3.85) instead.

It was all fine; though nothing was outstanding, it was good for the price. We ended up paying £9/head for six tapas and two small glasses of house wine, which was plenty for lunch. They had no problem bringing and replenishing a jug of tap water, and service was friendly in general.

Accessibility: One step up to get in, and toilets are down a flight of stairs.