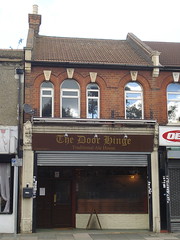 Opened in March 2013, this was London's first micropub — a new fashion in pubs defined by the Micropub Association as "a small freehouse which listens to its customers, mainly serves cask ales, promotes conversation, shuns all forms of electronic entertainment and dabbles in traditional pub snacks."

This one, situated in a small shop conversion on Welling High Street, is a small bare-boarded room with a tiny bar in one corner. Narrow church pew style banquettes run around the walls in a sociable U-shaped seating arrangement. Framed vintage adverts for things like Bardsley Brewery and Dr Watson's Tonic Stout hang on the walls along with photos of (and poems about) the owner photo. Hops hang near the ceiling. A small corridor to one side leads to a small "quiet room" with a sofa and armchair.

A window next to the bar offers a view onto the casks on stillage — no handpumps or keg taps here. Blackboards on either side of this window list the ales that are on and coming next. The only non-real-ale drink available is wine (red or white house wine), and the only food available is crisps, nuts, and pickled eggs.

Kake visited on a Wednesday afternoon in September 2014. There were no other customers when I arrived shortly after the opening time of 3pm, but one other did turn up just before I left half an hour later. No music was playing. Service was friendly and welcoming. The real ales on offer were Pig and Porter Penhurst Pale Ale (£3.20/pint), Goody Ales Good Harvest (£3/pint), and Rockin Robin Hoppin Robin (£3/pint).

Accessibility: No steps to get in, but there's a step to the back room and another step from there to the toilet.