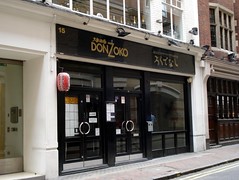 Now closed; was an izakaya (pub-style Japanese restaurant) on Kingly Street in Soho. As of autumn 2011, The Caterer reports that the new occupant of the premises will be an Italian restaurant called Fornata.

The information below is retained for people who want to know what Donzoko used to be like.

Izakaya (pub-style Japanese restaurant) on Kingly Street in Soho. It seems quite popular, and it's quite small, so it's probably best to book, at least in the evening.

There are 8-10 seats at the sushi counter (not sure whether the two nearest the door are reserved for people waiting for takeaway, since they're a bit out of the way) and maybe seven or eight two-person and four-person tables filling the rest of the rather small room. Strips of paper with menu items written on them in Japanese hang on hooks on the wall behind the sushi chefs photo; I believe the system is that when something runs out, its piece of paper is taken down. Some of the specials are written up in English; these might include peony prawn sushi (I think this is head-on king prawns), ark shell sushi, and sea urchin sushi.

Kake visited for a late lunch on a Wednesday in April 2008. I was seated at the counter; although I'd asked for a table, it was quite busy even at 2pm so they understandably didn't want me taking up a four-top on my own.

I ordered the mackerel teriyaki set lunch (£6.50, inclusive of everything mentioned in this paragraph). I liked the little piece of tofu with ginger and pickles that I got to start, and the miso soup was good. I was less keen on the main event, which comprised three pieces of mackerel on a bed of beansprouts on a "sizzler" platter type thing, and a bowl of rice. There were far too many bones left in the mackerel, and the skin was kind of chewy and even hard in places. The flesh was cooked fine though, and the beansprouts were also done just right, both tender and crisp. The rice was very disappointing; overcooked and in places almost mushy. Chilled seedless grapes to finish were just right, and the complimentary green tea was fine too.

The atmosphere was good; with most of the tables taken up, there was a good buzz of conversation. Service was fine too. I was initially a bit confused about whether it was OK to order from "mama-san" (the older woman in charge of seating people) or whether I had to wait for one of the waitresses, but she saw I was ready and came over to take my order.

Kake's verdict: Although my lunch wasn't perfect, I will come back some time in the evening to try their sakes and shochu cocktails and the small dishes mentioned in the Chowhound thread linked below.