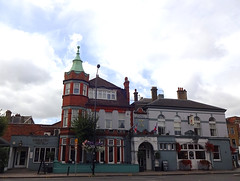 It's a large space, but broken up with pillars, room dividers, and the remains of internal walls where clearly there were once doors splitting it up into separate rooms. Original mosaic tiling runs along a "corridor" from the entrance, with a restaurant space on the left and drinking space on the right.

The walls are painted in muted shades of near-grey, giving a smart but non-monotonous look, while the floor is a mix of dark-varnished boards and various styles of tiling. Seating is a highly eclectic mix of sofas, small half-round armchairs, basketwork armchairs, at least two types of stool, and regular upright chairs.

bob visited early on a Thursday evening in January 2009. Young's Special (£3.15/pint) and Ordinary were on. The Special was fine.

Kake visited on a Monday morning in September 2018. There were just two other customers when I arrived around 10:30am. A breakfast buffet including cheeses and pastries was laid out in the restaurant area, and the tables there were laid with cutlery and napkins. Music was playing, not too loud, and relatively interesting. The six handpumps were clipped for four ales: Wimbledon Common, Wimbledon Copper Leaf, Young's Bitter, and Young's Special. A pint of lime and soda was £1.95.

They have WiFi, which is free but requires you to give a name and an email address.

According to a board outside in September 2018, there's a quiz every Sunday at 7:30pm.

Accessibility: No steps to get in, and it's step-free to the bar, most of the seating, and the accessible toilet once you're in.