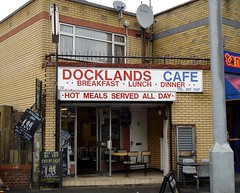 Docklands Cafe was a greasy spoon near Surrey Quays Station. It closed some time in early 2010, and as of May 2010 the site was occupied by another cafe called Café Quays photo (still there as of March 2014). We haven't tried the new place yet.

The information below is retained for people who want to know what it was like as Docklands Cafe.

bob visited on a Bank Holiday Monday in August 2008, and had a breakfast special with extras and a cup of tea which came to £7.60. The special would normally cost £3.90 and consist of egg, bacon, sausage, tomatoes, mushrooms and a fried slice. I had extra black pudding, hash browns and two slices of toast.

As of September 2008, they're also advertising an all-day breakfast at only £2.