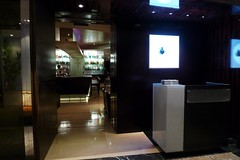 A Michelin-starred fine dining restaurant inside the Mandarin Oriental Hotel in Knightsbridge. It is credited by name to Heston Blumenthal (of Fat Duck fame), though he does not oversee the kitchen at this site. The concept is based around historical British food, and the menu carefully presents the dates of all the dishes (as well as further historical background on the reverse).

The entrance to the restaurant is via the hotel's main doors. There is a desk for the maître-d' outside the hotel's bar, and from the bar another entrance photo into the restaurant proper. Dinner staff are dressed in matching smocks and lead guests through to their tables. The space inside the restaurant is high-ceilinged and stretches out in an L-shape around the open kitchen, to maximise dining space alongside the high windows looking out over Hyde Park. Wall lamps are fashioned from ceramic jelly moulds, and huge clockwork cogs dominate the entrance to the kitchen space (ostensibly operating the pineapple grill just inside the kitchen's entrance).

At the table, menus are elegantly presented in a slip cover photo, which presents little factoids about the restaurant itself. The menus themselves cover the à la carte options (starters, mains and desserts), as well as a set lunch menu (£28 for three courses) photo of set lunch menu in June 2011. There is a separate (very bulky) wine list, which presents wines by glass, and then bottles by colour and region (the cheapest red is £20, the house red £29, and prices go steeply upwards from there, to around £6,000. As of February 2018, the median price was around £200 a bottle). Cocktails and aperitifs may be brought through from the bar area.

Ewan went for the set menu on his June 2011 visit, and was impressed by all the courses. His friend meanwhile ordered from the à la carte menu. On the set, a starter of ragoo of pigs ears with anchovy, onion and parsley photo was beautifully sticky and caramelised. One of the flashier dishes, the meat fruit (£13.50) photo, offers an unctuously smooth chicken liver parfait in the form of a mandarin (with a stippled mandarin-flavoured jelly skin) alongside toasted bread (only the plastic stalk is not edible): it is heavily written about for good reason, thankfully.

For the mains, the set offers a sous vide roast quail with smoked parsnips and thyme photo, lovely and pink inside. Spiced pigeon with ale and artichokes (£33) photo is also well-regarded by my friend, and Jersey royal potatoes on the side (£4.50) are perfectly cooked with butter and herbs.

Desserts are most impressive, with the tipsy cake accompanied by spit-roast pineapple (£10) a particular highlight photo. The fluffy cake itself, presented in a cast-iron bowl, drowns in a potently alcoholic sauce, and the (small amount of) roasted pineapple is a fine accompaniment. From the set, the orange buttered loaf photo is also really very nice with its crispy caramelised orange shell, and comes with a mandarin and thyme sorbet. The final course comes after the meal and is among the best of the meal, a white chocolate and Earl Grey tea ganache served with a cardamom biscuit photo.

Although it is not part of the Dinner restaurant itself, the bar serves as a waiting area for guests to Dinner. Service at the bar is very friendly and professional as expected (complimentary snacks are put out for every guest who sits down in the bar area - in February 2018 these were rice crackers and olives); there are low tables, as well as seats along either side of the bar itself, and a wide range of newspapers and magazines available. On Kerry and Ewan's August 2011 visit, the jasmine 'marteani' was a highlight. In February 2018, the price of a cocktail was around £18.

Ewan's verdict: The food is all perfectly-cooked and attractively presented, not as 'playful' and silly as I had imagined upon reading the endless media reports which focused on the meat fruit. Giving dates and stories for all the dishes is a cute concept, but luckily the staff on our visit did not belabour this when presenting the dishes (we received only a brief curt recap of the dish names), and I enjoyed my visit. For the right occasion, I would be pleased to return.