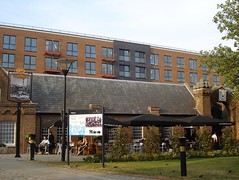 Young's gastropub at the Thamesmead West end of Woolwich.

It has a number of different areas inside, including the brightly-lit "pantry", a few more dimly-lit areas with armchairs to one side and booth seating along the wall photo, a restaurant area where you have to wait to be seated, and a reasonably-sized skylight-lit standing area in front of the bar photo. The decor is industrial, with exposed pipes and brickwork, and a combination of varnished floorboards and black slate tiles on the floor. There's seating out the front too, some of it covered.

Kake and bob visited on a Thursday evening in May 2011. There were a fair few people in, but due to the size of the place (and the good weather meaning a lot of people sat outside) there were plenty of choices for where to sit. Music was playing, slightly more dancy than really suited the ambience, but not too loud for conversation.

There was a good selection of real ale on, including Young's Bitter, Young's Special (£3.55/pint), Young's Prince Of Ales (£3.50/pint), Young's London Gold, Sambrooks Wandle, Meantime Pale Ale, and Brysons Union Flag. They also had Double Chocolate Stout on tap, and Addlestone's cloudy cider. A pint of lime and soda was £1.50.

As of May 2011, the main menu is served noon-3pm and 6pm-10pm Mon-Thu; noon-3pm and 6pm-11pm Fri; noon-11pm Sat; and noon-9pm Sun. It's fairly standard gastro fare, not uninteresting, and there's a separate pizza menu too. They also do breakfast 9am-noon Mon-Sat and 10am-noon Sun. Photos of menu as of May 2011: bar snacks and starters, mains, pizzas, Sunday roasts.

A starter of crispy squid with chilli mayonnaise (£6) photo was a little too salty and a little too greasy, though it was nicely presented and the squid itself wasn't overcooked. Kake's 35-day aged sirloin (£23 including chips and blue cheese salad; a special option for steak night, which is every Thursday) photo was pretty good; seasoned well, cooked rare as requested, and with a very nice flavour to the meat (complemented well by the blue cheese on the salad). The chips were skin-on, but unfortunately limp rather than crispy, and one or two were actually undercooked; the quality of the steak made up for this, though.

According to a couple of signs seen in May 2011, quiz night is Sunday from 8pm, and children are allowed in the pantry only (not the restaurant or the bar area) until 8pm every day.

Kake's verdict: An unusually good selection of real ales for a Young's pub, and the food wasn't bad. I'd come back, especially if it was steak night.