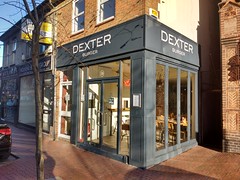 Dexter Burger was a small burger restaurant in Purley. It opened in mid-2015 but was forced to close in October 2020 due to the effects of the Covid-19 pandemic.

Burger restaurant in Purley. It opened in mid-2015. They do takeaway but not delivery, and they also do brunch on the weekends.

It's quite small, seating just 20 people at small freestanding tables plus another 4 on tall stools at a counter along one wall. Decor is of the industrial-chic style, with decorative "bare bulb" lighting including cables looped along the ceiling, and furniture built from scaffolding boards, varnished pale and smooth. Alcoholic slushies churn colourfully on the bar, in front of a display of wines and local bottled beers from the Cronx brewery.

Kake visited on a Friday evening in March 2016. There were half a dozen other customers in when I arrived a little before 6:30pm, and a few more popped in for takeaway orders while I was there. Music was playing, not too loud.

A tin mug of lightly salted popcorn and a large bottle of chilled tap water were placed on the table as I sat down; no charge for this appeared on the bill.

I went for the vegetarian burger, described as "beetroot, goats cheese & spinach" (£8 including rosemary fries) photo. This was one of the most interesting veggie burgers I've had in a while, made from raw and cooked beetroot, fresh horseradish, and vegetarian sausage mix (Sosmix), and it went well with the large slice of warm goat cheese on top. The proportion of burger to bun was well-balanced, and the bun stayed intact throughout. Rosemary fries were fine, though the rosemary flavour was fairly subtle in comparison to those I've had elsewhere.

Service was friendly, and there was no pressure to order sides or drinks. No service charge was added to the bill.

Kake's verdict: I'd happily come back if I wanted a quick bite to eat in the area.

Child-friendliness: They have two highchairs with trays (IKEA Antilop), and there's a pull-down nappy change table in the (unisex) toilet, though a sign warns that you have to take your used nappies with you as they can't dispose of them.

Accessibility: A large step to get in. No further steps to the toilet, which is a single large unisex cubicle.