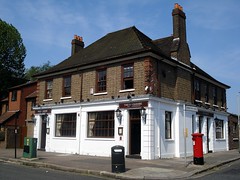 The Devonshire was a Gordon Ramsay gastropub in Chiswick. It closed in June 2010 after a kitchen fire and never reopened.

The site was later acquired by the people behind the Drapers Arms in Islington, who reopened it as the Devonshire Arms in July 2011 but closed it again in early 2012. It opened again under new management in May 2012, positioned as a traditional local rather than a gastropub, but closed again the next month.

The information below is retained for people who want to know what it used to be like as Gordon Ramsay's Devonshire.

A Gordon Ramsay gastropub in Chiswick.

The menu consists of about six dishes for each course. There are specials for both starters and mains, and the waitstaff will tell you what they are. Can probably seat about 50 in the dining area. The drinking area is of an okay size but has very few seats. Obviously you come here for the dining, and once you've sat down there is table service.

Bob visited on a Thursday night in March 2008. There were plenty of free tables but it wasn't quiet either.

We started with the langoustines (£8.00) photo and the honey-seared beef with stilton (£7.50) photo. The beef was fantastic, delicate and only slightly cooked. There was quite a bit of marbling and it was very tasty. The stilton was okay but Bob didn't think the dish really needed it.

For our mains we had pork belly (£13.50) photo and guinea fowl with bacon and bubble (£15.50) photo. The guinea fowl was moist and tasty. The bacon was really good, very crunchy and tasty.

For dessert, Richard had the cheesecake with prunes (£4.50) photo and thought it was really good. Bob had the rhubarb fool with a ginger biscuit (£4.50) photo. Both rhubarb and biscuit were really good, and I'd certainly order it again.

London Pride was £2.80 and quite drinkable, though admittedly not as good as in some of the other pubs nearby. A service charge of 12.5% is automatically added to your bill.

Bob's verdict: It was all really good. I would certainly come here again.