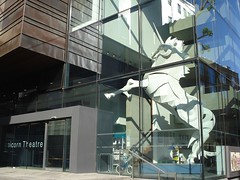 This is the cafe in the foyer of the Unicorn Theatre on Tooley Street in Bermondsey. It is near City Hall near the Tower Bridge Road end of Tooley Street. The cafe is run by Restaurant Associates who are part of the Compass Group. It used to be run by Frizantte and many reviews refer to the previous concession.

secretlondon visited one lunchtime in May 2009. They have a variety of sandwiches and hot drinks and do a plate of salad with a baked potato for £2.25. This was nice - you get things like grilled vegetables and a choice of fillings in your potato. I had a tea and some chocolate brownie which was rich with chocolate. Befitting the cafe of a children's theatre they do healthy food and small portions of traditional sweets.

secretlondon went back n January 2010 and found they'd put their prices up. It is now £3.75 for a hot main with less choices of salad, and the smoothies are £1.50 not £1. secretlondon isn't sure it's worth that.

The seating is canteen style benches.