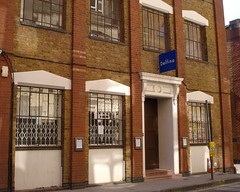 Delfina was a modern European restaurant on Bermondsey Street near London Bridge Station. It closed in February 2013. A new restaurant called Tanner & Co photo opened in its place in May 2013.

The space certainly is large, unexpectedly so on such a narrow street. Tables stretch all around the vast high-ceilinged room, presumably a former warehouse, considerately decorated though somewhat echoey.

The menu changes on a regular basis (every few days according to the website), and presents a number of options for starters, mains and desserts, including a vegetarian option for the main.

On Ewan's November 2008 visit, a spiced pear tarte tatin starter (£7) was expertly presented, with a half pear in a pastry shell alongside a stack of stichelton cheese intertwined with lettuce leaves and a drizzle of balsamic. As a whole it was very tasty, with the flavours working well together.

Mains were unpretentious but certainly well-made and tasty. My ginger and coriander puy lentils (£13) was a fairly substantial portion and only enhanced by the perfectly-cooked 'croutons' of halloumi, all very lovely. Meat mains were a few pounds more in price, and Melissa's pork belly was adjudged excellent.

The dessert menu presented all options at just under £6, or £8.50 including a small glass of matching dessert wine. Ewan had a filling chocolate tarte accompanied by black muscat, while Melissa's stichelton cheese was served with oatcakes and a Dow's ruby port.

Bottles of wine ranged from £17 upwards, with a special offer on a cabernet merlot priced at £22. It was listed as £25 on the final bill, but the waiter quickly corrected this when it was pointed out. Service was prompt and efficient, and there were no egregious waits either for food or for attention.

Ewan's verdict: A worthwhile and tasty meal, though three courses with a bottle of wine will set you back around £50 each. Still, not shabby at all, and a nice open bright space.